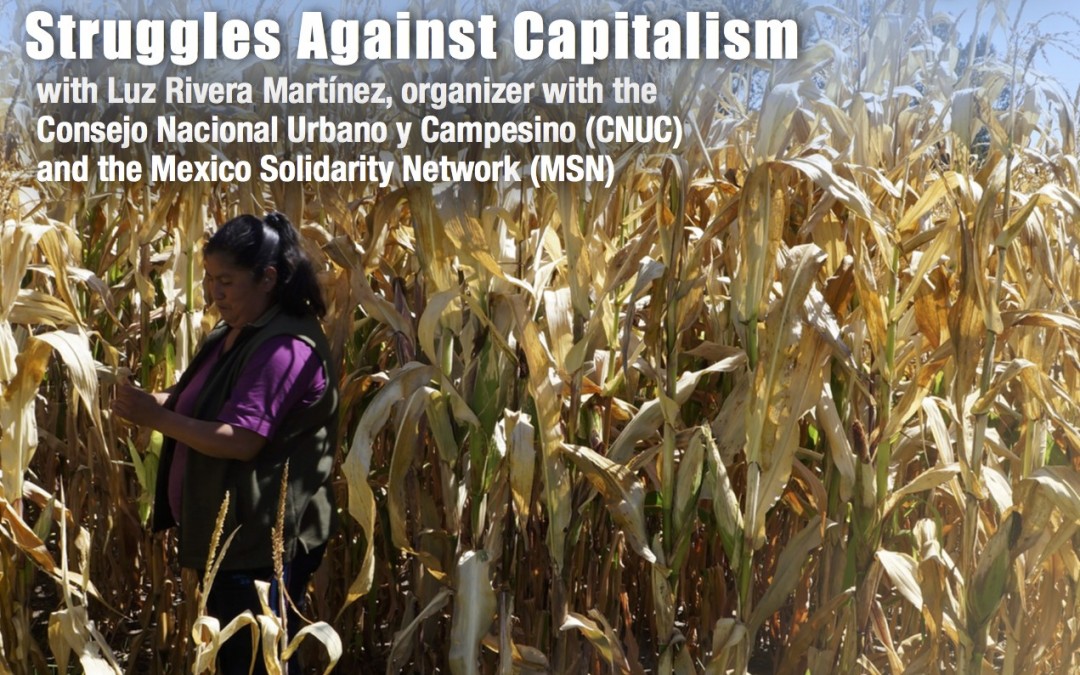 Mon, 11/28: 10a @  & 7p @ Canisius College
Tues, 11/29: @ Binghamton
Weds, 11/30:  @ SUNY Albany
Thurs, 12/1: @ SUNY Albany
Fri, 12/4: @Vassar College
Mon, 12/5:  @ Brown University
Tues, 12/6: @Connecticut College
Weds, 12/7: @ Yale University
Thurs, 12/8: 7p @ Unidad Latina en Acción
Fri, 12/9: @ NYU
Luz Rivera Martinez has 20 years of experience constructing autonomy, organizing outside the electoral system, and resisting genetically modified corn while protecting millennia-old varieties. She works with peasant families in Tlaxcala, Mexico – a state where corn originated, whose name means “place of the corn tortilla,” and where 52 natural varieties of corn are planted. This bountiful grain was created over thousands of years, primarily by women, and has now come to feed the world.
During the Mexican Revolution support for Emiliano Zapata was strong in Tlaxcala, and under the slogan of “the land belongs to those who work it” many peasants occupied the plantations their families had labored on as serfs for generations.
Today, the Revolution lives on through the work of the Consejo Nacional Urbano Campesino (CNUC). Luz established CNUC in the 1980s to coordinate resistance to the impending North American Free Trade Agreement, especially regarding its dismemberment of Article 27 of the Mexican Constitution, which enshrined peasants’ right to communally own the ejido lands redistributed during the Revolution.
As CNUC’s lead organizer, Luz has worked tirelessly to demand government accountability, defend family farms, and build inspiring, community-based autonomous projects. CNUC has a long history of disposing of corrupt leaders, democratizing the budget, coordinating community-driven infrastructure projects, including peoples’ history in education, and expanding access to healthcare.
CNUC also joins voices with organizations around Mexico and around the world denouncing State-sponsored violence and rebuilding the social fabric. As an adherent to the Zapatistas’ Sixth Declaration – an international network of organizations struggling against neoliberalism and for autonomy from the grassroots – Luz and CNUC fight tirelessly to build “a world where many worlds fit,” a world for the people of all the colors of corn.